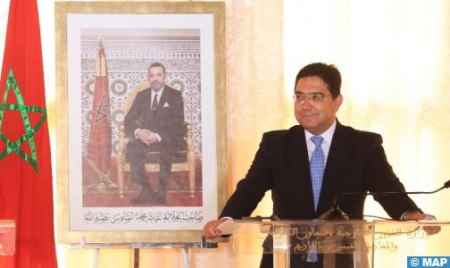 The Republic of Cabo Verde is a partner and ally of Morocco on its major issues, primarily the issue of the territorial integrity of the Kingdom, said Wednesday in Dakhla, the Minister of Foreign Affairs, African Cooperation and Moroccans Abroad, Nasser Bourita. “Bilateral relations began since the Republic of Cabo Verde withdrew its recognition of “puppet republic” in 2007 and have developed further in the framework of a fruitful cooperation,” said Bourita during a joint press briefing with the Cape Verdean Minister of Foreign Affairs, Cooperation and Regional Integration, Rui Alberto De Figueiredo Soares, after the inauguration of the Consulate General of the Republic of Cabo Verde in Dakhla. “Relations between Rabat and Praia have developed strongly in recent years,” said Bourita, citing in this regard the last visit to Rabat of De Figueiredo Soares last June, where the two countries agreed to establish strong relations of friendship and cooperation and raise them to a fruitful partnership in various areas. Bourita noted that this visit is an opportunity to thank the Republic of Cabo Verde for its firm positions on the territorial integrity of the Kingdom and its constant support and acting to the Moroccanness of the Sahara, noting that the opening of a Consulate General of Cabo Verde in Dakhla is another sign of support for the sovereignty of Morocco on its territory and confirms the Moroccanity of the Sahara. The Republic of Cabo Verde is also a key partner for Morocco within the African Union, the Economic Community of West African States (ECOWAS) and the Community of Portuguese-speaking Countries (CPLP), he continued, highlighting the coordination and convergence of views between the two countries that share the same vision of peace, security and development in Africa. Similarly, he said that the Republic of Cabo Verde has played an important role in the economic coordination of the Atlantic African States initiative that was launched in Rabat, noting that the second ministerial coordination meeting in New York will establish an action plan for this initiative for the coming years. In addition, Bourita noted that the two sides have also agreed to conduct visits at the highest level between the leaders of the two countries, in addition to the visit of the Prime Minister of Cabo Verde to Morocco, in addition to the preparation of the 2nd session of the Joint Commission next year in Praia, which is an opportunity to strengthen cooperation in various areas. Referring to the roadmap of cooperation and agreements signed between the two parties, Mr. Bourita said that “the number of scholarships granted by the Moroccan Agency for International Cooperation (AMCI) will be increased to 80 educational places, in order to strengthen cooperation between the two countries. The inauguration ceremony of the Consulate General of the Republic of Cabo Verde took place in the presence of the Ambassador Director General of AMCI, Mohamed Methqal and the President of the region, El Khattat Yanja, as well as consuls accredited to Dakhla and local officials and elected representatives. The number of consulates opened in the southern provinces has been increased to 27 (15 in Dakhla and 12 in Laayoune). The Republic of Cabo Verde opened Tuesday its embassy in Rabat, during a ceremony chaired by Rui Alberto De Figueiredo Soares and Nasser Bourita.