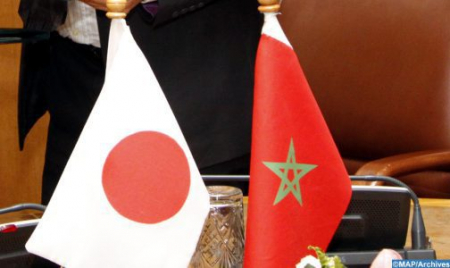 Morocco and Japan, two countries linked by “excellent” relations, have always been driven by a common will to raise these relations to higher levels, Japanese diplomats said Saturday. “Relations between the two countries go back many years,” former ambassador Takashi Shinozuka told MAP, highlighting the relations of esteem linking the August Royal Family and the Japanese Imperial Family. “Things continue to evolve in the right direction” between the governments of the two countries, the diplomat noted, adding that the statements issued Friday after talks between Minister of Foreign Affairs, African Cooperation and Moroccans Abroad, Nasser Bourita, and his Japanese counterpart Yoshimasa Hayashi, reflect the shared keenness of the two countries to move forward in strengthening their strategic relations. In seeking to consolidate these relations, the two countries start from a solid base, Shinozuka added, describing Morocco as a key partner for Japan. The Kingdom is endowed with excellent infrastructure, a highly skilled workforce and political stability. All these factors consolidate the calling of Morocco as a preferred destination for investment, he said. The former ambassador recalled, in this regard, the agreements concluded by the two countries, including the agreement on the protection of investments. Besides the excellent political and diplomatic relations, these agreements provide the right framework to ensure a promising future for the Moroccan-Japanese partnership, he noted. The Japanese investors are not indifferent to this reality, said the diplomat, noting that the private sectors of Morocco and Japan are called to cooperate more to achieve the goals set. On another register, Mr. Shinozuka said that Morocco and Japan “have a lot of things to achieve together” in the African continent, given the economic breakthroughs made by Morocco in Africa. Morocco has a large network of companies operating in the continent, he noted, adding that the two countries are well placed to establish a win-win partnership in Africa, based on the principles of South-South cooperation, fostered by HM King Mohammed VI. Regarding the territorial integrity of the Kingdom, the Japanese diplomat stressed that his country has always taken a “clear” and “unequivocal” position on this issue. Japan does not recognize the Sahara as a state, he said. For her part, Haruko Hirose, former ambassador and president of the Moroccan-Japanese Friendship Association, welcomed the talks held Friday between Bourita and Hayashi, stressing that relations between Morocco and Japan have their roots in the high esteem between the Royal Family and the Japanese Imperial Family. She welcomed the emphasis placed during these talks on the need to give new impetus to bilateral relations, noting, in this context, that the two countries have a huge potential to raise their economic cooperation to higher levels. “As a former Ambassador of Japan to Morocco, I can only confirm that both countries have a very important role to play in Africa, especially for the development of the continent in the framework of TICAD,” Hirose stated. She also expressed regret about the absence of Morocco at the last summit of TICAD 8, held in Tunisia, stressing that Morocco “is a key player” in the African continent. The Japanese FM expressed regret over this absence while reaffirming the position of Japan that does not recognize the puppet entity, the Japanese diplomat added, pointing out that the head of the diplomacy of her country has also confirmed that the puppet entity “was invited by Tunisia against the will of Japan.” Morocco and Japan have developed several projects of great importance in Africa within the framework of trilateral cooperation (Morocco-Japan-Africa), Hirose said, welcoming the keenness of both countries to strengthen their cooperation on many other issues that concern the international community as a whole.