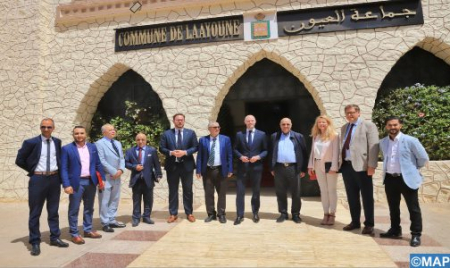 Members of a Belgian parliamentary delegation visiting Laayoune said Saturday they were “impressed” by the remarkable development of the region of Laayoune-Sakia El Hamra and the projects launched in all areas. The head of the delegation, MP David Leisterh said he was “impressed” by the level of socio-economic development and the quality of sports facilities in the region. In a statement to the press, Leisterh praised the quality of development projects in various fields in Laayoune and the ambitious infrastructure that provides employment and addresses the region’s challenges. During a meeting with the president of the city council, Moulay Hamdi Ould Errachid, the delegation was informed of the various development projects underway in Laayoune under the new Development Model for the Southern Provinces, launched by HM King Mohammed VI in 2015. For his part, Ouled Errachid stressed that the delegation’s visit was an opportunity to see firsthand the climate of peace and security in the region and to learn about the efforts made to strengthen the region’s infrastructure as well as the measures taken by the state to give a new impetus to development through the new model of development of the southern provinces. On this occasion, the members of the delegation attended exhibitions and took part in field visits to learn about the potential of the region, its infrastructure in various socio-economic sectors, and the efforts made to ensure sustainable socio-economic development in the southern provinces. The delegation visited several socio-economic projects structuring, namely the University Hospital, the Faculty of Medicine and Pharmacy, the media library, the women’s club and sports facilities.