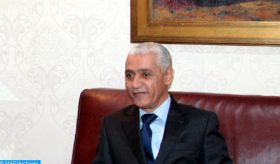 The reform and repositioning of the Pan-African Parliament (PAP) were at the center of talks, Friday in Midrand, South Africa, between the Speaker of the House of Representatives, Rachid Talbi Alami, and PAP President Fortune Charumbira. Talks took place at the end of the 11th Conference of Speakers of African National and Regional parliaments. In a statement to MAP, Talbi Alami stressed that talks focused on the operating mechanisms of the PAP which are subject to criticism, and on ways to contribute to the reform and repositioning of this pan-African institution. The African leader has expressed his wish to visit the Kingdom, accompanied by members of his Bureau, to benefit from Morocco’s experience in the parliamentary field and in other areas such as global warming, the impact of Covid-19, food security and energy security, he added. Talbi Alami added that the conference, which was an opportunity to showcase Morocco’s successful experience in these different areas, under the leadership of HM King Mohammed VI, included a series of bilateral meetings with Speakers of African Parliaments, who expressed their keenness to benefit from the Kingdom’s support and experience. On Thursday, Talbi Alami met with the Speaker of the Egyptian House of Representatives, Hanafi Ali Gibali, and the Speaker of the National Assembly of the Democratic Republic of Congo (DRC), André Mbata. Following these talks, Mr. Mbata told MAP that Morocco is a great country that plays a key role in Africa. “The development of Africa to which we aspire can not take place without the contribution of Morocco,” he stated. He also stressed that both parties have discussed ways to boost the Morocco-DRC friendship group to further strengthen the excellent bilateral relations through the exchange of meetings between MPs of both countries. The 11th Conference of Speakers of African National and Regional parliaments took place on the sidelines of the sixth parliamentary term under the theme of the African Union (AU) for 2022: “Building resilience in nutrition on the African continent: Accelerate the human capital, social and economic development.”