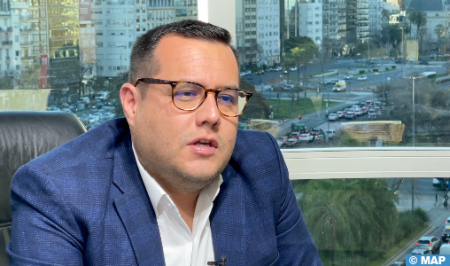 Peru’s recent decision to withdraw the recognition of a fictional republic has reopened the page of the brotherly relations with the Kingdom of Morocco, said Franco Salinas Lopez, former member of the Peruvian Congress and candidate in the municipal elections of next October. In a statement to M24, MAP’s News Channel, the legal expert stressed that Peru has decided to “withdraw recognition of a republic that does not exist on the ground,” adding that this decision is “consistent with international law and the practices in place for good relations between countries. Salinas Lopez also praised the important role played by HM King Mohammed VI in the establishment of bridges of communication and dialogue between Morocco and Latin America which eliminate various forms of barriers between the two parties, stressing in this context the need to intensify visits in both directions. For the Peruvian expert, the consolidation of bilateral relations between the two countries requires brotherly relations and the signing of agreements and conventions between the two countries to further strengthen the strong relationship between Rabat and Lima. The former Peruvian congressman invited the parliaments in both countries to intensify the exchange of visits in order to learn about the different experiences on both sides, especially with regard to inter-cultural cooperation. Last August, Peru decided to “withdraw recognition of the so-called sadr and sever all relations with this entity,” while expressing its support for the autonomy initiative in the Moroccan Sahara. The Foreign Ministry of Peru  expressed its support for “the territorial integrity and sovereignty of the Kingdom of Morocco” over its Sahara. Morocco welcomed the decision of the Republic of Peru, considering that this decision “opens a new page in relations with this friendly country.”