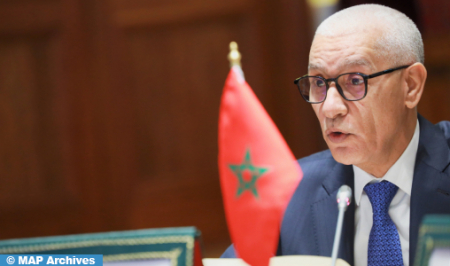 The role of legislative institutions in strengthening bilateral cooperation in the economic, commercial, cultural and health fields was highlighted during a meeting, Thursday in Rabat, between speaker of the House of Representatives, Rachid Talbi El Alami, and Ambassador of the Islamic Republic of Pakistan in Morocco, Hamid Asghar Khan. The meeting focused on relations between the two countries, especially at the parliamentary level, and ways to strengthen them through the exchange of visits, effective and permanent communication between the two parliamentary friendship groups, as well as coordination in various parliamentary forums, both regional and international, said a statement by the House of Representatives. The speaker of the House of Representatives and the Ambassador of the Islamic Republic of Pakistan stressed the respect of the sovereignty and territorial integrity of States and the commitment to international legitimacy, welcoming the deep-rooted and solid relations between Rabat and Islamabad. On this occasion, the statement said, Hamid Asghar Khan handed over an invitation from speaker of the National Assembly of Pakistan, Raja Pervaiz Ashraf, to the speaker of the House of Representatives to make a parliamentary working visit to the Islamic Republic of Pakistan. The meeting also provided an opportunity for both sides to review the specificity of the parliamentary system of the two countries and the responsibility of the legislative institutions not only in the field of law, but also in the areas of oversight of government action, evaluation of public policies and strengthening international cooperation through effective parliamentary diplomacy interacting with national, regional and international causes. The meeting was a diplomatic opportunity to discuss and exchange views on various issues that are among the priorities of bilateral and multilateral parliamentary action, the statement added.