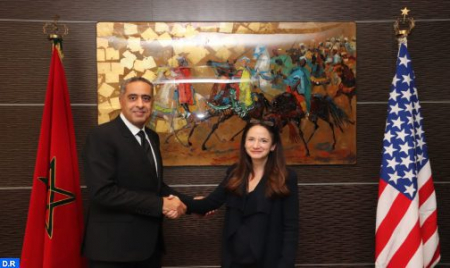 The Director General of National Security and Territorial Surveillance, Abdellatif Hammouchi, received, on Monday afternoon in Rabat, U.S. National Intelligence Director Avril Haines. This meeting goes in the framework of implementing the results of high-level bilateral talks that Hammouchi had had with the U.S. official, on the sidelines of a working visit he made to the United States on June 13-14, said a statement from the Directorate General of Territorial Surveillance (DGST). During these talks, the two sides reviewed the security situation at the regional level and discussed the threats and challenges arising from this situation in some parts of the world, the statement said. The discussions also focused, according to the same source, on the dangers posed by the connections between terrorist organizations and organized crime networks, including cybercrime, in addition to other forms of cross-border crime. Hammouchi and Haines discussed, on the same occasion, ways to develop bilateral cooperation between security and intelligence services, so that it is up to the strategic cooperation between the two countries and in tune with the challenges inherent in the joint action for the preservation of security and peace at regional and international levels, the statement said. It added that this new meeting between the two officials reflects the advanced level of bilateral partnership in the field of security and intelligence, given the importance of the position held by Haines as coordinator and head of several agencies and U.S. intelligence services, and also in view of the regularity and consistency of meetings between the two parties and the convergence of views on strategic issues of common interest.