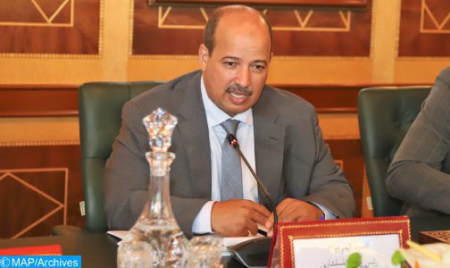 Speaker of the House of Advisors and president of the Association of Senates, Shoora and Equivalent Councils in Africa and the Arab World (ASSECAA), Naama Mayara, met on Tuesday at the presidential palace in Bujumbura, with vice-president of the Republic of Burundi, Prosper Bazombanza, on the sidelines of his presidency of the ninth consultative meeting of ASSECAA. This meeting was an opportunity for Mayara to reiterate the quality and strength of relations of respect, cooperation and solidarity between Morocco and Burundi, under the leadership of HM King Mohammed VI, and HE Evariste Ndayishimiye, president of the Republic of Burundi, said a statement by the House of Advisors. The speaker of the upper house stressed that these relations, based on mutual respect, joint cooperation and efficient solidarity, continue to develop to include various areas, recalling in this sense the signing between the two countries in 2021 of the roadmap of bilateral cooperation for the 2021-2024 period, which illustrates the common will to strengthen bilateral relations and give them a new impetus. Mayara called in this context to translate this common will to establish a multidimensional bilateral partnership including economic cooperation, exchange of investments, promotion of trade and implementation of joint projects. The speaker of the House of Advisors reiterated the readiness of Morocco to provide support, share its experience, expand cooperation programs with Burundi and accompany the country in priority areas, including education, training, agriculture, technical cooperation and digitization, in addition to establishing partnerships between regions and local authorities. Regarding the issue of the Moroccan Sahara, the speaker of the House of Advisors reiterated his thanks and gratitude to the Republic of Burundi for its firm position and its constant support for the territorial integrity of the Kingdom and the autonomy plan in the southern provinces as the only solution to this artificial conflict, welcoming the mutual support of the two countries in the various meetings and continental and international forums in a framework of sincere and active solidarity. For his part, Bazombanza welcomed the quality of relations between Morocco and Burundi, based on cooperation and solidarity at all levels and through various initiatives, citing in this sense the opening of a Consulate General of his country in Laayoune in 2020. The vice president of the Republic of Burundi welcomed the support and accompaniment of Morocco in Burundi in various areas, including education and training, expressing the willingness of his country to expand them to include agriculture, environment and decentralized cooperation. Bazombanza also stressed the need for joint action to explore broader horizons of cooperation and bring together economic operators of both countries, to develop business partnerships and promote the various investment opportunities offered by Morocco and Burundi. The vice president of the Republic of Burundi praised the efforts undertaken by ASSECAA under the chairmanship of Mayara, to promote dialogue between Arab and African countries as well as cooperation and partnerships between the two regions in various fields, noting that the organization of this consultation meeting in Burundi strengthens its regional and international opening.