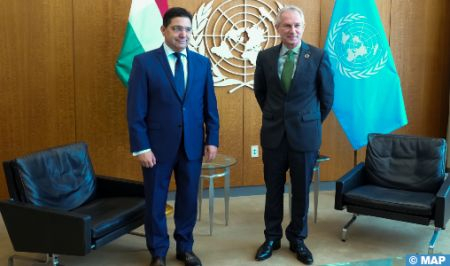 Minister of Foreign Affairs, African Cooperation and Moroccans Abroad, Nasser Bourita, accompanied by the Ambassador Permanent Representative of Morocco to the UN, Omar Hilale, met, at the UN headquarters in New York, with president of the 77th Session of the General Assembly, Csaba Kőrösi. While congratulating him on his election, Bourita stressed Morocco’s full readiness to work with the new president of the UN General Assembly on concrete initiatives to address the global challenges facing the UN and its member states, including the climate, energy and financial crises. He highlighted the structuring and large-scale projects launched by the Kingdom, in accordance with the high guidelines of His Majesty King Mohammed VI, particularly in the areas of education, the generalization of social coverage, renewable energy, climate and health and vaccine sovereignty for Morocco and Africa. Bourita also highlighted the vision and the High Royal Instructions for the strengthening of the rights and participation of women in society. The president of the General Assembly stressed, during this meeting, the important role and contribution of Morocco within the United Nations, on fundamental issues such as sustainable development goals and water management. In this context, he hoped that the General Assembly would benefit from the expertise of Morocco in this field, during the next events that he intends to initiate during his mandate in November and March. At the end of this meeting, Bourita invited the president of the General Assembly to make a working visit to Morocco during his term, which Kőrösi accepted by expressing his thanks to the Kingdom. The meeting took place on the sidelines of the general debate of the 77th session of the UN General Assembly.