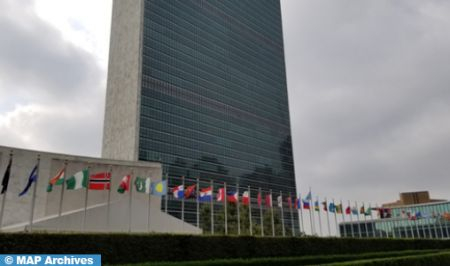 Morocco’s delegation to the United Nations has issued a right of reply to Algeria’s statement in reaction to Morocco’s national speech during the general debate of the 77th session of the UN General Assembly. In this right of reply, the Moroccan delegation stressed that its Algerian counterpart saw fit to respond to the statement of the Kingdom of Morocco in the general debate to reiterate its fallacious remarks on the issue of the Moroccan Sahara, in an attempt to evade its historically, legally and politically established responsibility in this regional dispute. In doing so, the Algerian delegation is vainly trying to mislead the international community. The Moroccan delegation has only reiterated the decisions taken by the United Nations and the facts as established, demonstrating before the UN General Assembly, by historical, political and legal evidence, by UN decisions, as well as by Algeria’s own facts and actions, that Algeria is the main party to the regional dispute over the Moroccan Sahara, and that this dispute is a question of the territorial integrity of the Kingdom of Morocco. In the right of reply, the Moroccan delegation noted that Algeria is mentioned five times in all the latest Security Council resolutions, including resolution 2602 of last October. It is mentioned the same number of times as Morocco, and the Council makes it a principal party to this dispute. The Moroccan delegation also recalled that Algeria submitted, on November 2, 2001, in Houston, to the then Personal Envoy of the Secretary-General, James Baker, a proposal for the partition of the Moroccan Sahara territory and its population. This was categorically refused by Morocco. Algeria created the “polisario” armed separatist group. It welcomes it on its territory, finances it generously, provides it with all the weapons and supports it diplomatically, devoting to it all the means available in its diplomatic apparatus, the delegation added. Contrary to Algeria’s misleading assertions, the question of the Moroccan Sahara is a matter of territorial integrity and national unity of the Kingdom of Morocco, and in no way a so-called decolonization issue, the delegation stressed, noting that it was Morocco that put the question of the Moroccan Sahara, in 1963, on the agenda of the United Nations, to definitively recover its southern provinces. In the right of reply, the Moroccan delegation indicated that its Algerian counterpart continues to evoke a so-called referendum. Whatever the Algerian delegation may say, the so-called referendum is dead and buried, and despite its vain attempts, Algeria will never be able to resurrect it, because one does not bring the dead back to life, the delegation added, noting that the only solution to which the Security Council calls is the political, realistic, pragmatic, lasting and compromise solution to this regional dispute, in accordance with paragraph 2 of resolution 2602, embodied by the Moroccan autonomy initiative. With regard to the round table process, and once again unlike Algeria, Morocco is in line with international legality. Indeed, the process of the round tables has been enacted, established and enshrined by the Security Council in all its resolutions since 2018, including resolution 2602, added the source, noting that the Security Council has also enshrined the format and the participants which are: Morocco, Algeria, Mauritania and the “polisario”. By attacking the roundtable process, Algeria is attacking international legality, embodied in the resolutions of the Security Council, the only authority responsible for examining the question of the Moroccan Sahara, according to the Moroccan delegation. Concerning the biased references of the Algerian delegation to the Moroccan Autonomy Initiative, the delegation recalled that the pre-eminence of this Initiative has been enshrined in the 18 resolutions of the Security Council, since its presentation in 2007. These same resolutions have welcomed the seriousness and credibility of the Moroccan Autonomy Initiative. The delegation stressed, in this context, that the Moroccan autonomy initiative, within the framework of the sovereignty and territorial integrity of the Kingdom, is the one and only solution to this regional dispute, supported by more than 90 UN member states. Stressing that the southern provinces of the Kingdom of Morocco enjoy the highest level of development in the entire North African region, the delegation said that 27 countries and regional organizations have opened consulates general in the Moroccan cities of Laayoune and Dakhla. Regarding the registration and census of the populations held against their will in the camps of Tindouf, the Algerian delegation is, once again, in breach of the law and international conventions, because, noted the same source, since 2011, all Security Council resolutions have continued to call on Algeria to allow the UNHCR to conduct a census of these populations. As for the proven links between the “polisario” and terrorist groups in the Sahel, the Moroccan delegation reminded its Algerian counterpart the case of the terrorist Adnan Abu Walid al Sahrawi, a member of the “polisario” who has long lived in the camps of Tindouf, and who was the leader of the terrorist group “Islamic State in the Greater Sahara”, and who was shot last year. This is only one case, among others of links of the “polisario” with terrorism in the Sahel. It concluded that the Algerian delegation is called upon to privilege the voice of reason and to engage, seriously, in the process of round tables, as requested by resolution 2602, to achieve a final solution to this regional dispute, on the basis of the Moroccan autonomy initiative.