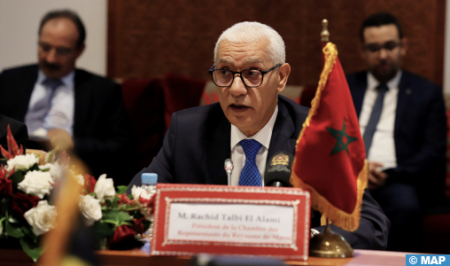 Speaker of the House of Representatives, Rachid Talbi Alami held, Thursday in Rabat, talks with vice president of the French National Assembly, Valerie Rabault. The French official is leading a delegation visiting Morocco to take part in the launching ceremony of an institutional twinning program scheduled for Friday between the lower house, the French National Assembly, the Belgian House of Representatives and the Czech House of Representatives. During this meeting, Talbi Alami praised relations between the two institutions, stressing the importance of this parliamentary cooperation in an institutional framework on the level of consultation in the face of the challenges posed, said a statement by the House of Representatives, noting that he also made a presentation on the democratic experience and the Moroccan parliamentary system as well as the major achievements and other projects launched by the Kingdom under the enlightened leadership of HM King Mohammed VI. For her part, Rabault said that this visit is an enshrinement of the depth of the parliamentary friendship relations between Morocco and France, noting that the programs, agreements and joint projects between the House of Representatives and the French National Assembly will allow to better communicate and to mutually benefit from the expertise and experiences accumulated. She commended the achievements made by Morocco and all the projects launched in the Kingdom, according to the same source which specified that the talks between the two parties have mainly focused on ways to boost bilateral and multilateral parliamentary relations, in addition to the examination of many issues of common interest including immigration and cultural exchanges.