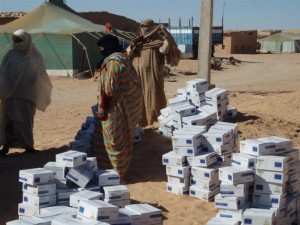 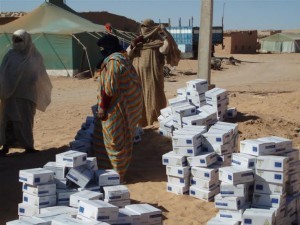 The scandal that has just been revealed in Brussels about the diversion of the European aid to the Tindouf camps refugees has had the effect of a bombshell in the corridors of power in Algiers.

In a report of extreme gravity, revealed Thursday by AFP, the European Union (EU) discredits uncompromisingly the Algerian and Polisario leaders.

The information on the massive misappropriation of humanitarian aid destined to the Sahrawi population sequestered in the Tindouf camps controlled by the Algeria-backed Polisario has long been relayed by official and independent sources in Morocco. But this time, the information is confirmed by a reliable European source.

In this scandal, that was long kept secret, both by the EU and by UN specialized agencies, corrupt Algerian officials and their accomplices among the Polisario leaders are explicitly singled out.

The very compromising report drafted by the European Anti-Fraud Office (OLAF) in 2007 reveals that large quantities of the European humanitarian aid to the Sahrawi refugees in Tindouf have been systematically diverted for years.

According to the Anti-Fraud Office, the embezzlement starts at the port of Oran. There, the goods are sorted out between batches that “should” be sent to Tindouf and batches that can be diverted.

Thus, says OLAF, the Canadian wheat and other good quality foodstuffs destined to the refugees “are replaced by lower quality products” and are sold on the black market.

“The products of a poultry project financed by international aid are sold instead of being given to the refugees,” says the report whose findings are based on the results of a survey conducted since 2003.

The report was written in 2007 but was not published. It was only after the intervention of the European Ombudsman in 2014 that the report was made public this January.

According to the report, the diversions were facilitated by the overestimation of the number of refugees and therefore of the aid provided. The EU has been extending to the camps refugees € 10 million per year since 1975, on the basis of a 155,000 strong population as estimated by Algerian authorities.

Although the OLAF brought down the number in 2005 to 90,000 people, the EU has maintained, for unknown reasons, its aid at € 10 million per year.

OLAF imputes the contradiction between figures to Algeria and the Polisario that have never “accepted that a census of the population of the camps be held.”

The census issue is one of Morocco’s claims in the Western Sahara conflict settlement.