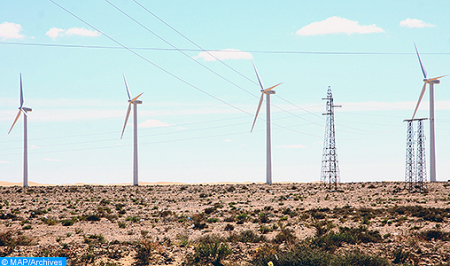 Morocco aspires to become a regional energy hub and a transit country for the cross-border exchange of electrical energy thanks to its strategic assets in terms of interconnection infrastructures, according to the vice-president of the “Egyptian Natural Gas Holding Company” (EGAS), Samir Al-Quraish. These assets allow the Kingdom of Morocco to create an African regional electricity market and integrate it with the European market, Al-Quraish said in an article published under the title “Arab Countries’ Experiences in Transition to Green Economy” in the October issue of the quarterly magazine “International Politics”. Morocco plays an important role at the regional level in the exchange of electrical energy since it is “the key player in the electricity market in the Euro-Maghreb region, he added. Morocco’s roadmap is based on increasing the share of renewable energy in the energy mix, developing the power grid and the interconnection with neighboring countries, and implementing the roadmap on marine, geothermal and fossil energy, the author noted. The Kingdom has established research and innovation platforms, including the Green Energy Park, and the Green and Smart Building Park, in addition to other platforms under development for hydrogen, biomass and water desalination. According to Al-Quraish, Morocco is the first in the MENA region in the Green Future Index, published by the MIT Technology Review platform, which ranks 76 countries and territories according to their progress towards a green future. Morocco has launched an energy strategy since 2009. Its main axes are electricity, clean energy, expanding the use of solar and wind energy, and the introduction of liquefied natural gas and natural gas in the electrical energy mix, he recalled.