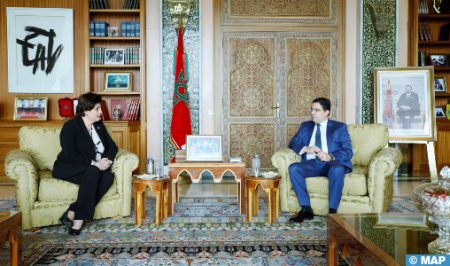 The Guatemalan deputy minister of Foreign Affairs, Ava Atzum Arevalo Tribouillier de Moscoso, reiterated, Monday in Rabat, her country’s full support to the autonomy plan in the southern provinces, as the only solution to the dispute over the Moroccan Sahara. “We fully support Morocco and its autonomy initiative in the Sahara, which we consider the only solution to this dispute,” said the Guatemalan deputy minister at the end of her meeting with Minister of Foreign Affairs, African Cooperation and Moroccans Abroad, Nasser Bourita. “We know that Morocco is a country with great potential. That is why we will open a Consulate General of our country in Dakhla,” said the deputy minister. “I am in Morocco today to prepare the visit to the Kingdom of our Minister of Foreign Affairs who will proceed next month to the inauguration of our Consulate in Dakhla,” she added. Guatemala announced on September 23, 2022, through its Minister of Foreign Affairs, Mario Bucaro Flores, its decision to open a Consulate in Dakhla, reaffirming its support for the autonomy plan under Moroccan sovereignty as the only solution to the regional dispute over the Moroccan Sahara. “For us, the concepts of sovereignty, peace and territorial integrity are very important. We support Morocco’s position on this issue and we will continue to support Morocco forever,” said the Guatemalan head of diplomacy in a statement to the press after a meeting with Bourita on the sidelines of the 77th UN General Assembly. In this context, Bucaro Flores “highly appreciated the reforms undertaken in Morocco under the leadership of HM King Mohammed VI, as well as His role and His contribution to the resolution of the problems of Africa and the Arab world by peaceful means”.