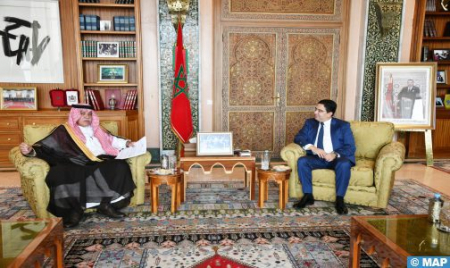 The Minister of Foreign Affairs, African Cooperation and Moroccans Abroad, Nasser Bourita, met on Monday in Rabat with the Saudi Minister of Trade, Majid Ben Abdullah Al Qasabi. Earlier in the day, the Head of Government, Aziz Akhannouch, had held talks with the Saudi minister. These talks focused on strengthening economic and trade cooperation between the two kingdoms through the identification of the best levers to give new impetus to bilateral trade, in the interest of the two sister kingdoms. Majid Ben Abdullah Al Qasabi is on a working visit to Morocco at the head of a large delegation representing the public and private sectors.