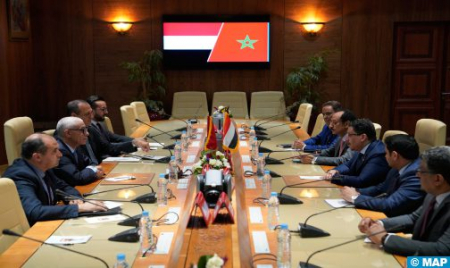 Speaker of the House of Representatives, Rachid Talbi Alami, met on Tuesday in Rabat with the Yemeni Minister of Foreign Affairs and Expatriates, Ahmed Awad Bin Mubarak, who is on an official working visit to Morocco. During this meeting attended by the Ambassador of the Republic of Yemen to Morocco, Ezzedine Al Asbahi, the two sides discussed ways to strengthen bilateral cooperation as well as several international and regional issues of common interest, said a statement by the House of Representatives. After reviewing the achievements made in recent years by Morocco under the leadership of HM King Mohammed VI and presenting the specificities of the Moroccan Parliament and the electoral system, Talbi Alami stressed that the lower house is willing to share its expertise and experiences with the Yemeni brothers, noting that it is an active member in several regional and international parliamentary bodies, institutions and forums. On this occasion, the speaker of the House of Representatives extended an invitation to his Yemeni counterpart to visit Morocco, with a view to strengthening cooperation between the legislative institutions of the two countries, establishing bridges of exchange between MPs and creating platforms for dialogue, discussion and communication. During this meeting, the speaker of the House of Representatives commended the positive position of Yemen in favor of the Moroccan Sahara issue, recalling that any solution to the artificial conflict over the Sahara can only be done within the framework of sovereignty and territorial integrity of the Kingdom. For his part, the Yemeni Minister of Foreign Affairs and Expatriates said that his visit to Morocco will be marked by the signing of a series of agreements in various fields, to develop bilateral cooperation between Yemen and Morocco, lauding in this regard the political positions of Morocco in favor of Yemen.