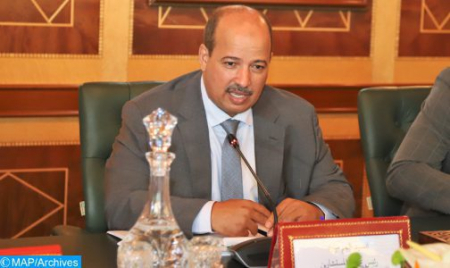 Speaker of the House of Advisors, Naama Mayara, held talks, Wednesday in Rabat, with Yemeni Minister of Foreign Affairs and Expatriates, Ahmed Awad Bin Mubarak. Welcoming this meeting, which is part of the strengthening of fraternal ties between the two brotherly countries, Mayara stressed the constant position of Morocco and its support for peaceful efforts to preserve the territorial integrity of Yemen and meet the aspirations of its people in terms of safety, security and stability, said a statement by the House of Advisors. On this occasion, Mayara expressed Morocco’s gratitude to Yemen for its official position supporting the territorial integrity of the Kingdom, stressing the danger and threat posed by terror and extremist organizations to the security and unity of Arab countries. For his part, the Yemeni minister highly praised the Kingdom of Morocco’s continued support for Yemen at all levels, especially with regard to its territorial integrity. Expressing the Yemenis’ desire to see Moroccan support continue and to bring their voices to international forums, Bin Mubarak welcomed Morocco’s clear position denouncing Iranian interference in the Arab region. In addition, Bin Mubarak reiterated his country’s position on the Moroccanness of the Sahara, noting that any solution to this artificial dispute must be done in respect of the sovereignty and territorial unity of the Kingdom of Morocco. The head of Yemeni diplomacy expressed his willingness to visit the southern provinces to be aware of the level of development achieved in various fields.