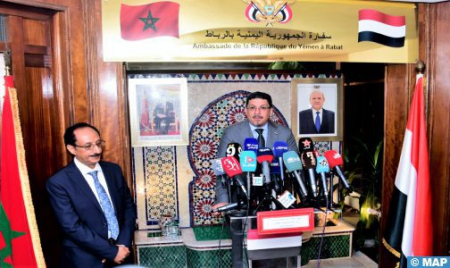 Yemeni Minister of Foreign Affairs and Expatriates Ahmed Awad Bin Mubarak welcomed, Wednesday in Rabat, the “clear and distinguished” positions of the Kingdom of Morocco supporting the legitimate government of his country, since the outbreak of the crisis. “The Kingdom of Morocco has always adopted positions supporting the legitimate government of Yemen, since the outbreak of the crisis. This Moroccan position is distinguished, clear and supports the Presidential Council in Yemen since its formation in April 2022,” said the head of Yemeni diplomacy, during a press conference at the headquarters of the Yemeni Embassy, on the occasion of his official visit to the Kingdom. Morocco is among the countries that have supported the political leadership in Yemen in international forums, he said, recalling that his meeting with the Minister of Foreign Affairs, African Cooperation and Moroccans Abroad, Nasser Bourita was an opportunity to reaffirm this clear support for the stability of Yemen and the political settlement according to the three political parameters namely: the Gulf initiative, the recommendations of the conference of national dialogue and related international resolutions including resolution 2216 as a basis for political settlement in Yemen. After highlighting the central role played by Morocco at the African, Arab and Islamic levels, the minister maintained that the positions of Morocco on the parliamentary level including regional and international bodies have always been clear through support for constitutional legitimacy. He said that the legitimate government is committed to the extension of the truce agreement, despite its cost and the damage caused by the obstacles imposed by the Houthis during each stage of its implementation, adding that the government has worked to ensure the conditions for peace negotiations, convinced that the only loser is the people who pay the bill for the war imposed by the Houthis to serve the expansionist agenda of Iran. The minister also considered that peace can be achieved in Yemen if the Houthis manage to prevail the interest of Yemen instead of serving sectarian or regional interests of expansionist nature, assuring moreover that the presidential council is determined to unify the ranks and improve the services provided to Yemenis. He, in the same vein, stressed that Morocco’s condemnation of Iranian interference in its internal affairs emanates from a conviction based on data and truths. “All the peoples of the region have suffered from Iran’s expansionist agenda and Yemen is best placed to address this issue and its repercussions,” said Mr. Awad Bin Mubarak, stressing the need for the Iranian regime to respect international legality. The visit of the Yemeni minister to Morocco was crowned by the signing of cooperation agreements in various fields.