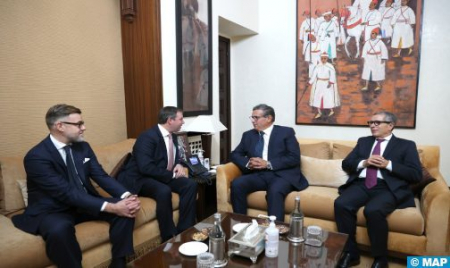 Head of Government, Aziz Akhannouch, received, Tuesday in Rabat, HRH Prince Guillaume, Hereditary Grand Duke of Luxembourg, who is on a working visit to Morocco leading a delegation of businessmen representing companies specializing in various economic sectors, during which he will hold talks with several members of the government and senior officials. According to a statement by the Department of the Head of Government, the meeting, which took place in the presence of Minister of Economy of Luxembourg Franz Fayot and the Ambassador of the Kingdom of Morocco to Belgium and the Grand Duchy of Luxembourg Mohamed Ameur, was an opportunity for both parties to express their common desire to continue the partnership between the two countries and their aspiration to further develop economic and trade relations, particularly through encouraging Luxembourg companies to explore new investment opportunities in Morocco, bilaterally or within the framework of the tripartite cooperation Morocco-Luxembourg-Africa. The Head of Government also reviewed the major economic projects launched by Morocco under the enlightened leadership of HM King Mohammed VI, which have helped consolidate the Kingdom’s position as an attractive economic and industrial hub in the region, the statement said.