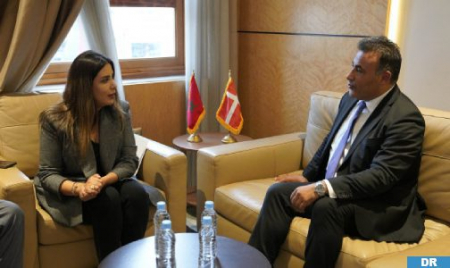 The autonomy plan presented by Morocco within the framework of international legality represents “the optimal solution to the artificial conflict around the Moroccan Sahara,” said Tuesday in Rabat, Naser Khader, member of the Foreign Affairs Committee in the Danish Parliament. During a meeting with the chairwoman of the Committee on Foreign Affairs, National Defense, Islamic Affairs and Moroccans Abroad in the House of Representatives, Nadia Bouaida, Khader, currently on a friendship and working visit to Morocco, noted that Rabat and Copenhagen are committed to the principles of respect for the sovereignty of states and their territorial integrity, respect for international legality and the resolution of conflicts peacefully, said a statement from the first chamber. The talks between the two parties focused on ways to consolidate cooperation between the two Moroccan and Danish Commissions, the statement said. In this regard, it adds, Bouaida noted the importance of dialogue and joint action between the two legislative institutions through the intensification of visits, the opening of communication channels, the exchange of experiences and the promotion of coordination and consultation at the various international parliamentary forums on issues of common interest. Referring to the issues of migration and religious guidance of the Moroccan community abroad, Bouaida noted that the Kingdom of Morocco deploys significant efforts in this regard, reflecting the permanent concern of His Majesty King Mohammed VI for the members of the Moroccan community abroad, in order to preserve and anchor their religious constants, the statement concluded.