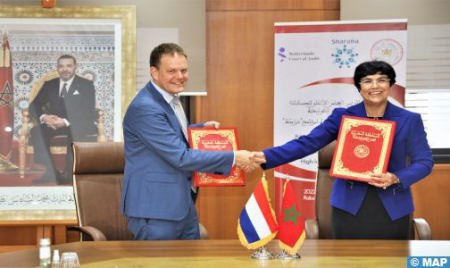 The Court of Accounts and the Court of Audit of the Netherlands signed Thursday in Rabat, a cooperation agreement under the cooperation program “Sharaka 2”. In a statement, the Court of Audit said that this initiative, which provides a platform for work between the two parties in areas of common interest, follows the success of the program “Sharaka 1”, concluded between the two institutions in 2016 for a period of five years, and affecting several topics, including those of performance audit, reforms related to public finance, IT audit, integrity as well as monitoring the implementation of sustainable development goals. In a speech on this occasion, the First President of the Court of Accounts, Zineb El Adaoui, recalled the reasons and the context of the conclusion of this agreement, which is a translation of the willingness of both parties to establish a framework for sharing experiences and best practices in the areas of performance audit, audit and communication, to enshrine the principles of transparency, accountability and good governance in the management of public finances, in accordance with international standards adopted in the field of financial control. For his part, the Vice President of the Dutch Court of Audit, Ewout Irrgang, stressed the importance of promoting the work of the two institutions at the level of the two countries in the areas of data analysis and performance audit, which will contribute to the improvement of their policies to support citizens and business development, adding that this will contribute to the enhancement of the positioning of Supreme Audit Institutions and their communication through the publication of their work. Both parties have expressed their readiness to establish practical mechanisms for the implementation of the provisions of the Memorandum of Understanding and to achieve its objectives in a way that serves the Supreme Audit Institution at the level of both countries, concludes the statement.