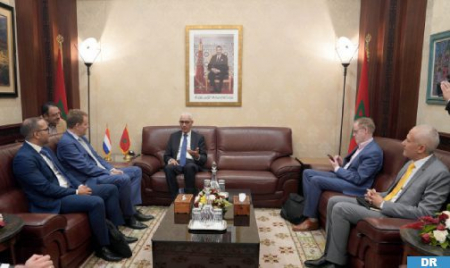 Speaker of the House of Representatives Rachid Talbi Alami met, on Thursday in Rabat, with the Vice President of the Dutch Court of Audit, Ewout Irrgang, as part of cooperation under the “Charaka 2” program. During their talks, Talbi Alami and Irrgang, who is leading a delegation on a working visit to the Court of Accounts from 11 to 13 October, highlighted the relationship between the legislative institution and the Court of Audit, the Lower House says in a statement. On this occasion, Talbi Alami has highlighted the Moroccan parliamentary experience under the 2011 Constitution, as well as the missions assumed by the Parliament, especially with regard to the evaluation of public policies and relations with other constitutional institutions, the same source adds. For his part, Irrgang and the members of the delegation accompanying him gave an overview of the functions and competencies of the Court of Audit and its relationship with the House of Representatives in the Netherlands, as well as they discussed the cooperation and partnership relations with the Moroccan Court of Accounts since 2016. This meeting was an opportunity for both parties to discuss comparative models and practices regarding the relationship between financial jurisdictions and legislative institutions.