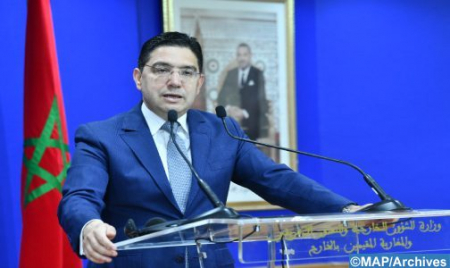 The existence of separatist groups in Africa is a direct factor in triggering civil wars and racial and ethnic conflicts, as well as upheavals in the social and cultural fabric that undermine the foundations and stability of the continent’s countries, said Sunday, Nasser Bourita, Minister of Foreign Affairs, African Cooperation and Moroccan Expatriates. The security challenges facing the African continent today are, as a whole, unprecedented and unexpected, with a pace that continues to accelerate and a complexity that grows exponentially, said the Minister in a speech read on his behalf at the opening of the fall session of the 43rd edition of the International Cultural Moussem of Assilah and the 36th edition of the Open University Al-Mu’tamid Ibn Abbad. In this context, Bourita added that nearly half of the victims of terrorism in the world have died in Africa, especially since terror organizations are expanding and imposing more and more control in geographical areas across the continent, noting that Africa remains the continent most affected by crises, conflicts, wars and the impact of climate change that threaten food security and cause demographic transformations due to forced displacement and migration. Africa also faces the scourge of arms and drug smuggling, aggravated by porous borders and weak and fragile security systems, he noted, stressing that the lack of good governance and strong institutions has generated a state of political and social instability, dragging the democratic process into a chronic fragility that manifests itself through successive military coups. The Minister noted that separatist ideology not only causes civil wars, but also fuels extremism and terrorism, explaining, in this sense, that separatist and terrorist movements have several points of convergence, namely undermining the sovereignty and foundations of states, attracting abundant funding and replicating operational tactics. In this context, Bourita said it is necessary to establish effective partnerships based on existing structures, including regional organizations, stressing the need to strengthen synergies and unify efforts on the African continent at national, subregional and regional levels, taking into account the requirements and specificities of countries. The Minister said that the kingdom trusts regional organizations and supports all the steps of the African Union, whose Peace and Security Council is chaired by Morocco during the month of October, recalling that the Moroccan capital, Rabat, hosts an important African body: the African Migration Observatory. The Kingdom not only supports regional organizations, but also paved the way for the creation of the Organization of African Unity, and defined the common framework of action, he added, noting that Morocco, in accordance with the High Directions of His Majesty King Mohammed VI, has devoted its efforts, since its return to the African Union, to the reunification and development of the pan-African body, by adopting the policy advocated by the Sovereign in Africa, based on responsibility, solidarity and joint action. The Moroccan approach is based on the idea of a global and broad engagement at different levels, lending a hand and accompanying brotherly African countries in the different stages of achieving security and development, through participation in UN peacekeeping forces deployed in Africa and effective contribution to the fight against terrorism, through a comprehensive and innovative approach to eliminate terrorism at its source, accepted by African countries that benefit from the training and education of imams and morchidines, noted Bourita. The Minister pointed out that Morocco, in parallel to these contributions, is making tireless efforts to eliminate marginalization and exclusion, fight climate change and threats to food security and combat the root causes of extremism.