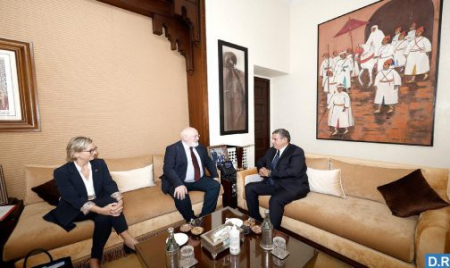 Head of Government, Aziz Akhannouch, received Tuesday in Rabat the executive vice-president of the European Commission and Commissioner for Climate Action Policy, Frans Timmermans, on a visit to the Kingdom on October 18 and 19 to sign the “Green Partnership” between the European Union and Morocco on the issues of energy, climate and environment. The meeting was an opportunity to exchange views and discuss ways to consolidate the strategic partnership between Morocco and the European Union, an issue that HM King Mohammed VI is particularly interested in, said Tuesday a statement by the Department of the Head of Government. During this meeting, Akhannouch said that the activation of the “Green Partnership” pact between Morocco and the European Union will exploit all the opportunities it offers in terms of energy security, green hydrogen, interconnection or concerning the gas pipeline linking Europe, Morocco and Nigeria, emphasizing the importance of this pact to advance the large-scale project of energy transition for the two partners, preserving the environment and stimulating the green economy, said the same source. The “Green Partnership”, the first pact of its kind to associate the European Union with a partner country, helps to give a positive dynamic to bilateral relations and to meet the challenges imposed by the difficult international situation. The two parties had stated in June 2021 their willingness to establish this partnership to strengthen their cooperation in the fight against climate change.