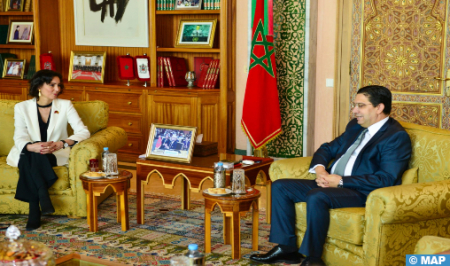 Morocco is a “historic” and “strategic” partner for Belgium and the entire European Union (EU), said Hadja Lahbib, Belgium’s Minister of Foreign Affairs, European Affairs and Foreign Trade and Federal Cultural Institutions, currently visiting the Kingdom. “Morocco is for Belgium and the whole EU, moreover, a historical and strategic partner in trade, regional stability, security, migration, climate, energy and the fight against terrorism,” said Lahbib at a press briefing held after a meeting with Minister of Foreign Affairs, African Cooperation and Moroccan Expatriates Nasser Bourita. “Morocco is also the country of origin of hundreds of thousands of Belgians. These Belgians whose parents, grandparents came from the Rif, the regions of Tiznit, Souss, Rabat, Tangier and many other cities, link our two countries forever,” she stressed, believing that Belgians of Moroccan origin are “a human link between Rabat and Brussels.” The Belgian minister also welcomed the willingness of Morocco and Belgium “to share and progress further” in their economic and trade relations, and to launch a strategic dialogue to optimize bilateral cooperation in various areas. “Our excellent relations, the importance of our historical ties and our common challenges make the establishment of a regular and structured dialogue more than necessary,” she said. For his part, Bourita said that this visit is part of a “phase and a very positive sequence” of strengthening bilateral relations marked by a regularity of ministerial, parliamentary and other visits, adding that it also reflects “the friendship, esteem and consideration between the Royal Families of both countries.” The Minister welcomed the “very fruitful exchanges” with his Belgian counterpart, saying they have allowed both sides “to design and discuss ways to build on a long-standing friendship a more strategic partnership with a diversified content and involvement of various economic actors, paramilitary, security and judicial. In this regard, Bourita announced the holding, during the next year, the High Level Cooperation Commission after an interruption of ten years.