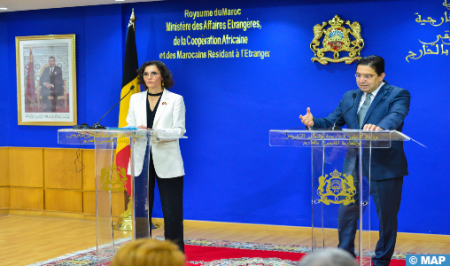 South Africa’s “gesticulations” and “agitations” around the Moroccan Sahara reflect its “inability to act on the case,” said Nasser Bourita, Minister of Foreign Affairs, African Cooperation and Moroccan Expatriates, on Thursday. “Rolling out a rag or a red carpet does not alter the case, but rather expresses inability to influence,” said Bourita at a press briefing after his meeting with Belgian peer Hadja Lahbib, responding to a question on the South African president’s reception of the polisario militia leader. The minister noted that “with all the developments” that have marked this issue, South Africa “is on the wrong side of history,” especially at a time when the trend is to achieve a solution within the UN. “A solution based on international legitimacy, and which distinguishes a state from a militia, a flag from a rag, is what people expect from a credible country,” he said, noting that “Morocco will continue to defend its interests, and use all means in its possession.” Bourita also pointed out that Pretoria’s behavior in relation to the Moroccan Sahara issue “harms bilateral relations and everything that has been built, especially in economic circles.” “A South African company cannot make money in Morocco by standing idly by in the face of its government’s actions,” he said, recalling HM King Mohammed VI’s clear speech of August 20, in which the Sovereign said that the Sahara issue is the lens through which Morocco views its international environment. “Morocco is not surprised by what is happening, it is something we have become accustomed to, and which has no effect,” said the minister, adding that “everything that South Africa has sown in the past, it will reap in the future, namely that there will be no impact on the issue, its evolution and the direction it takes.” The minister recalled that South Africa recognized the puppet entity in 2005 thinking that the course of the file would change and that Africa and the world would follow suit. However, what really happened is that since 2005, 20 countries have withdrawn their recognition, 10 in Africa, including 7 in the neighborhood of Pretoria and that “nothing has changed” although South Africa has joined the Security Council three times since 2005 (in 2007, 2011 and 2019). “South Africa notes that half of the African continent, 23 countries, have opened consulates in the southern provinces, including several countries from its direct neighborhood and region,” Bourita continued. He also noted that 90 countries, including Belgium and nearly 10 other European countries, are now expressing a positive position in relation to the autonomy plan that Morocco presented in 2007. “Of these 90 countries, 30 are African countries that adopt the same positive attitude,” added the minister, who welcomed the “constructive” approach adopted by the African Union on the Sahara.