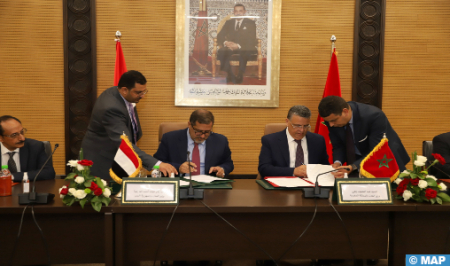 A memorandum of understanding aimed at boosting the exchange of experiences in the judicial field between Morocco and Yemen was signed, on Monday in Rabat, between Justice Minister Abdellatif Ouahbi and his Yemeni counterpart Badr Abdo Ahmed Alaredh. This protocol of cooperation in the judicial and legal fields between the two ministries aims to promote the sharing of expertise in the modernization of judicial administration, qualification of human resources in terms of management of justice, use of modern technology in the sector. On this occasion, Ouahbi stressed that the agreement will promote bilateral cooperation through the establishment of a joint action program to exchange experiences in this area, adding that the visit to Morocco of the Yemeni Minister of Justice will expand the fields of cooperation in the future. He also stressed his department’s willingness to support the efforts of this Arab country in terms of training and capacity building of actors in the judicial sector, including the sharing of Moroccan expertise in the field of combating human trafficking, in harmony with the decisions of the United Nations. The Yemeni minister said that his country relies on the Kingdom, in particular the Higher Institute of the Judiciary (ISM), to give new impetus to the justice sector in Yemen. The ISM will host, under this agreement, the laureates of the Yemeni Higher Institute to continue their doctoral studies, he said. This visit is part of the participation of the Yemeni government official in the 38th session of the Council of Arab Justice Ministers held on October 20 in Ifrane.