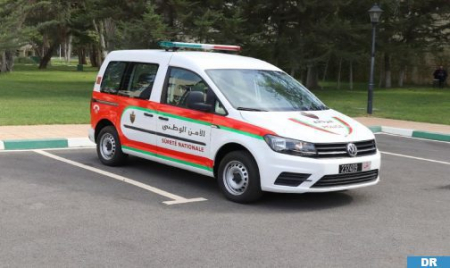 The Directorate General of National Security (DGSN) has adopted a new visual identity, with special design and features, for the vehicles used by police rescue, security patrols and law enforcement units. This new visual identity, adopted as part of DGSN’s efforts to renew and develop its fleet, will be generalized to all new vehicles and motorcycles, which will integrate the security service, from October 25, 2022, said the DGSN in a statement. The new visual identity of vehicles and motorcycles of public security, used by security patrols and police units of rescue, is characterized by its white color with an inscription of the emblem of national security in red and green on the front and on the doors of the car, accompanied by the national flag, as well as the number 19 to receive various calls for help from citizens. Another similar identity with the same characteristics, this time with blue paint, was adopted to differentiate the rest of the police vehicles, made available to mobile units of law enforcement, responsible for managing and securing the demonstrations and major events, adds the same source. The DGSN seeks through the adoption of this new visual identity to differentiate security vehicles from other vehicles, in order to facilitate their mission to preserve the security of the country and citizens, to make them easily identifiable and reachable by citizens in case of calls for help or intervention on the public highway. The adoption of this new visual identity is part of a continuing dynamic to which the DGSN has adhered in order to develop the public police service to meet the aspirations of citizens, concludes the statement.