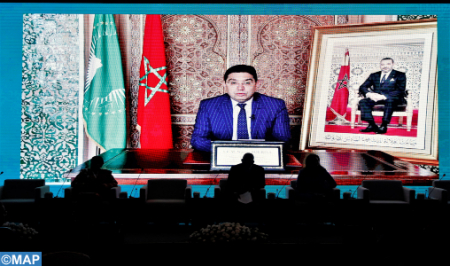 The Kingdom of Morocco reiterates its commitment to a reorientation of efforts to further infuse the triple nexus of peace, security and development within the African institutional architecture, said Nasser Bourita, Minister of Foreign Affairs, African Cooperation and Moroccan Expatriates, on Tuesday in Tangier. These statements came during a video-conference held at the opening of the Policy Conference in Tangier, organized in partnership with the Department of Political Affairs, Peace and Security of the African Union (AU). On this occasion, Bourita called for the establishment of an AU Fund for Development, like the Peace Fund, dedicated to financing African collective action in socio-economic and human development. He also called for the exploration of avenues and mechanisms likely to strengthen synergies and coordination between the various bodies in charge of sustainable development, peace and security and governance in Africa. This especially concerns coordination between the African Peace and Security Architecture (APSA), the African Governance Architecture (AGA), AUDA-NEPAD and the AfDB. In addition, the Minister called for the establishment of the continuity of this Policy Conference by institutionalizing it as the ‘Tangier Process’, which will involve all stakeholders including the private sector in the creation of a positive momentum for the stability and development of the Continent. He further noted that the objective will concern developing reliable data on the implementation of the triptych “peace, security and development” in the realization of Agenda 2063 and the Sustainable Development Goals. The choice of Morocco to host this conference is a token of recognition of its contribution to the theme since HM the King has erected the approach based on the “nexus peace, security and development” at the heart of Morocco’s commitment to Africa since the return of the Kingdom to the AU, he noted.