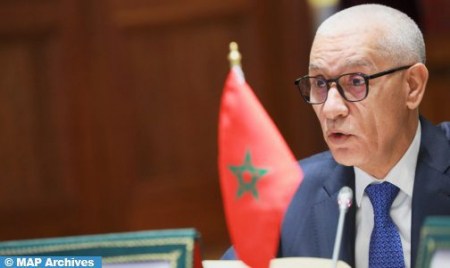 Speaker of the House of Representatives, Rachid Talbi Alami, met, Tuesday in Rabat, with the rapporteur of the Committee on Political Affairs and Democracy of the Parliamentary Assembly of the Council of Europe (PACE), Senator Ria Oomen-Ruijten, who is currently on an official visit to the Kingdom to prepare the fourth report on the Partnership for democracy. Exchanges between the two parties focused on the relationship between the Moroccan Parliament and PACE and the status of Morocco as a partner for democracy for over 11 years, said a statement by the House of Representatives. The talks also focused on the three reports concerning the years 2013, 2015 and 2019, which highlighted the commitment and willingness of Morocco to consolidate democratic choices, as well as ways to strengthen the partnership ties between the Moroccan Parliament and PACE, the same source said. During this meeting, the two parties recalled the achievements of the Kingdom and the major projects in which it is engaged under the wise leadership of His Majesty King Mohammed VI, to enshrine democratic practice, protect human rights, build the State of institutions and law, and strengthen linguistic and cultural pluralism, as well as freedom of speech and expression, which has made Morocco a model at the regional and international levels. During this meeting, Talbi Alami reviewed the Moroccan parliamentary experience under the Constitution of 2011, focusing on the last elections of 2021, the representation of women and the high turnout of citizens, especially young people, added the statement. The Moroccan electoral system and the transformations taking place in the Kingdom and the ratification of several international conventions and treaties that guarantee human rights and democratic choices were also mentioned by the speaker of the House of Representatives who emphasized the role of Morocco in preserving the rights of migrants and the regularization of their status by adopting an innovative migration and exile policy since 2013. Senator Ria Oomen-Ruijten, for her part, welcomed the relations between the Parliamentary Assembly of the Council of Europe and the Moroccan Parliament, praising the achievements in strengthening and consolidating democracy, which will be highlighted in this report, the fourth of its kind, which is being prepared. She also indicated that the Parliamentary Assembly is keen to strengthen its ties with the Moroccan Parliament and envisages more advanced levels of partnership and cooperation. This meeting was also an opportunity to exchange views on several regional, continental and international issues of common parliamentary interest.