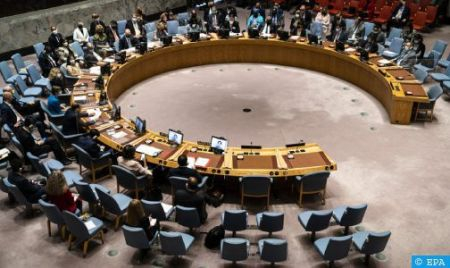 The efforts made by HM King Mohammed VI, in His capacity as Chairman of the Al-Quds Committee, in favor of the Palestinian question were highlighted during a high-level debate at the UN Security Council. During this open debate held Friday on the situation in the Middle East, including the Palestinian question, the Ambassador Permanent Representative of Gabon to the UN, Michel Xavier Biang, whose country holds the rotating presidency of the Security Council for the month of October, commended the important role of the Al-Quds Committee chaired by HM the King. For her part, the Deputy Permanent Representative of the United Arab Emirates to the UN, Amiera Al Hefeiti, underlined the efforts made by the Al-Quds Committee under the chairmanship of HM King Mohammed VI, for the protection of the Holy City. In addition, the Deputy Permanent Representative of Iraq, in his capacity as Chairman of the Arab Group at the UN for the month of October, highlighted the role of the Al-Quds Committee and the important work it is doing on the ground for the benefit of the Maqdissis, particularly through the Bayt Mal Al-Quds Asharif Agency. In the same vein, the permanent representative of Pakistan hailed, on behalf of the Organization of Islamic Cooperation (OIC), the continuous efforts of HM the King to preserve the Islamic holy places in Al-Quds Asharif against attempts of Judaization. He also welcomed the “concrete” role played by the Bayt Mal Al-Quds Agency in carrying out activities and development projects for the benefit of the holy city’s inhabitants. The permanent observer of the League of Arab States, Maged Abdelaziz welcomed, for his part, the important role of HM the King in defending the Palestinian question. Agreeing with him, the representative of the Non-Aligned Movement (NAM) stressed the important role of the Al-Quds Appeal, signed by HM the King and His Holiness Pope Francis, during the visit of the Pontiff to Morocco in March 2019. The Movement, which includes 120 UN member states, also expressed its high appreciation of the Al-Quds Appeal which emphasizes the role of the holy city as a symbol of tolerance, coexistence and mutual respect. It also noted that this Appeal stresses the need to preserve the specificities and the character of Al Quds as a city of peaceful coexistence. This recognition is a reaffirmation of HM the King’s leadership as Chairman of the Al-Quds Committee, as well as a unanimous appreciation by the representatives of the Arab Group, the NAM and the Islamic Ummah in New York, of the Sovereign’s tireless efforts on the international scene to support the Palestinian cause, preserve the specific status of the Holy City and assist its populations.