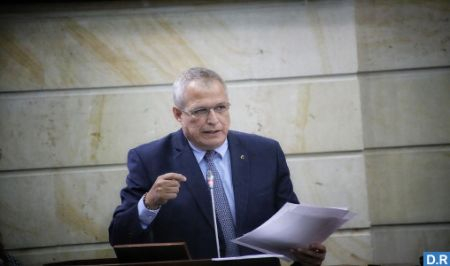 The majority of the Colombian people is opposed to the decision to establish relations with the polisario, “a separatist group that is not recognized by the UN, nor by any European or Arab country, except for Algeria,” said Colombian Senator German Blanco, who pleads for the revision of this decision. German Blanco stressed that the signature this week by a majority of Colombian senators (62 out of 108) of a motion that rejects the decision of President Gustavo Petro to establish relations with the so-called “sadr”, is a strong signal on the rejection of this initiative by the majority of the Colombian people. In the Senate, “we believe that Colombia should not interfere in the internal affairs of another sovereign state and that Morocco deserves all our respect,” insisted the senator in an interview with MAP. “We have had bilateral relations with Morocco for 50 years, relations reflected in conventions and trade agreements that make the Kingdom a strategic partner for Colombia,” Senator German Blanco added. For these reasons, “Colombia, contrary to what President Petro and his Minister of Foreign Affairs do, cannot establish relations with a separatist group.” The Colombian senator emphasizes that the motion to reject this decision was signed by a majority of senators from the center-right and the left, including those who are political allies of Gustavo Petro, so that the current government “corrects its position towards the separatist group of polisario.” He added that the motion stresses that Colombia aspires to “strengthen relations with Morocco (…) which we consider a strategic partner in the current international context and a gateway to Africa.” German Blanco also said that the Colombian government’s decision, which does not reflect the position of all Colombians, nor that of Congress, risks “deteriorating a very solid relationship with Morocco.” Last Tuesday, a motion endorsed by an overwhelming majority of the Colombian Senate had expressed its “outright rejection” and “its total disagreement” with the decision of Gustavo Petro which “goes against the fundamental principles of Colombian diplomacy.”