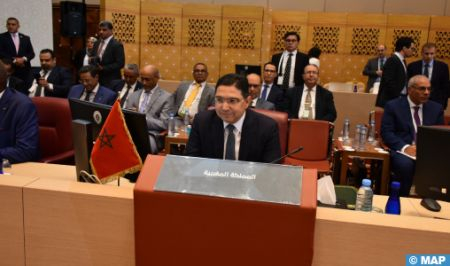 The meeting of Arab foreign ministers kicked off Saturday in Algeria in preparation for the Arab League Council summit, scheduled for next Tuesday. Morocco is represented at this meeting by a delegation chaired by the Minister of Foreign Affairs, African Cooperation and Moroccan Expatriates Nasser Bourita, and composed of the Ambassador of Morocco in Egypt and Permanent Representative of the Kingdom to the League of Arab States Ahmed Tazi, the Director of the East, the Gulf, Arab and Islamic Organizations at the Ministry of Foreign Affairs, African Cooperation and Moroccan Expatriates Fouad Akhrif and the head of the Division of Arab and Islamic Organizations at the Ministry, Abdelali Al-Jahed. The objective of this meeting is to continue the discussion on the draft agenda of the Summit, to formulate the draft declaration that will conclude its work and to complete the examination of the issues raised by the permanent delegates and senior officials during the last two days. The draft agenda of the Council of the Arab League includes 19 items, including the reports submitted to the Arab Summit, the Palestinian issue, the Arab-Israeli conflict and its developments, solidarity and support for Lebanon, developments in the Syrian crisis and the situation in Libya. The Arab foreign ministers also discuss the situation in Yemen, support for peace and development in Sudan, support for the republics of Somalia and the Union of Comoros, the issue of Iran’s occupation of the three Emirati islands, and Iranian interference in the internal affairs of Arab countries, the adoption of a unified Arab position concerning the violation by Turkish forces of Iraqi sovereignty, the maintenance of national security in the Arab world, as well as the fight against terrorism and the development of the Arab system to combat this scourge. The agenda of the meeting also includes items related to joint Arab action, amending the provisions of the statute of the Arab Parliament, in addition to the draft resolutions submitted by the Economic and Social Council, as well as the proposal for reform and development of the Arab League.