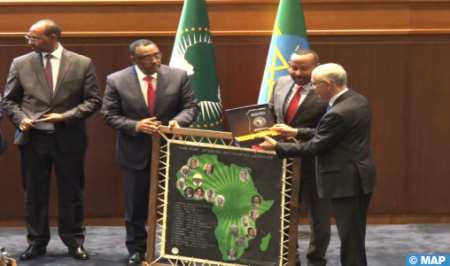 Ethiopia has awarded a Pan-African Prize to the late His Majesty King Hassan II, may God rest His soul in peace, for the late Sovereign’s dedication and contribution to the emancipation of Africa and Pan-Africanism, particularly through his actions in the creation of the Organization of African Unity. The Pan-African Prize was awarded on Tuesday in Addis Ababa to the Speaker of the House of Representatives Rachid Talbi El Alami by the Ethiopian Prime Minister Abiy Ahmed, during a grand ceremony organized in Addis Ababa on the occasion of the first African Youth Summit which was held from October 29 to November 1 in the Ethiopian capital. Through this award, Ethiopia pays tribute to His Majesty Hassan II for the dedication and contribution of the late Sovereign to the emancipation of Africa and to Pan-Africanism, sources of inspiration for the young generations for the renewal of African Leadership. Late His Majesty Hassan II was honored with an exceptional recognition as a defender of the unity of Africa and the prosperity of the continent in a presentation before the Ethiopian Prime Minister, former African Heads of State, members of the government, the diplomatic corps accredited in Addis Ababa and high-level personalities. The actions of His Majesty Hassan II in the fight against colonialism, in the establishment of peace, development and prosperity of Africa were highly highlighted during this ceremony that honored the late Sovereign for his defense of Africa’s noble causes. The ceremony was also an opportunity to pay tribute to eminent African leaders, Founding Fathers of the Organization of African Unity and Pan-Africanism and to present the Award to ten other African Heads of State. Speaker of the House of Representatives thanked HM King Mohammed VI, may God assist Him, for entrusting him with the mission of the official reception of this Pan-African Prize. This Prize was decided by the Ethiopian Prime Minister in recognition of the efforts undertaken by African kings and leaders, stressed Talbi El Alami in a statement to the press after the ceremony. The Speaker of the House of Representatives noted that the late His Majesty Hassan II is the only Head of State who has been honored by Ethiopia in North Africa as the founder of the pan-African organization and a leader who has contributed greatly to resolving several disputes and support the liberation of African peoples from the yoke of colonialism. The fact that this prize was awarded on the occasion of the organization by Ethiopia of the first African Youth Summit attended by 54 African countries recognized by the UN, denotes a great change and recognition of the efforts of the Kingdom of Morocco, said the President of the House of Representatives. Placed under the theme “Africa integrated – the bridge of Prime Minister Abiy Ahmed”, the African Youth Summit is the first of its kind to bring together the youth of the continent in Addis Ababa with the aim of creating a platform for the leaders of Africa’s future to share their experiences.