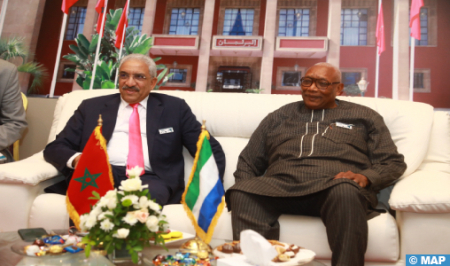 The first deputy speaker of the House of Representatives, Mohamed Sabbari, held talks, Tuesday in Marrakech, with speaker of the Parliament of Sierra Leone, Abass Chernor Bundu, on ways to strengthen cooperation between the two legislative institutions. “Sierra Leone has very close ties with the government and people of the Kingdom of Morocco, and we want to give a new impetus to parliamentary relations to raise them to the level of our excellent relations,” said Bundu in a statement to the press after the meeting, on the sidelines of the Africa and Middle East Regional Meeting of the Open Government Partnership (OGP). The Sierra Leonean official welcomed his “very fruitful” exchanges with the first deputy speaker of the House of Representatives, which focused on ways to strengthen relations between Freetown and Rabat, as well as several issues of common interest. For his part, Sabbari praised the excellent level of bilateral parliamentary ties, calling to further consolidate them through the exchange of visits and to promote communication between MPs of both countries towards more bilateral and multilateral coordination. In this sense, he said that this meeting was an opportunity to express the joint desire to revitalize the Morocco-Sierra Leone parliamentary friendship group, which provides an appropriate framework to consolidate cooperation between the two legislative institutions.