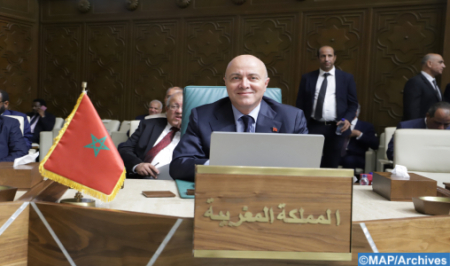 The participation of the Moroccan delegation to the 31st session of the Arab Summit, in Algeria, was distinguished and active on all levels from the stages of preparation to the holding of the proceedings despite the difficult conditions, said, Wednesday, the Moroccan Ambassador to Egypt, Permanent Representative of the Kingdom to the Arab League, Ahmed Tazi. Pursuant to the High Instructions of HM King Mohammed VI on the development of joint Arab action to make it more effective politically, economically and socially, the participation of the Moroccan delegation to the Arab Summit was distinguished and active both at the level of preparation (Council of Permanent Delegates, Economic and Social Council and Council of Foreign Ministers) and during the proccedings of the Summit, and this despite the difficult conditions, noted the Moroccan diplomat in a statement to MAP. This dynamic was evident in the official meetings and consultations held on the sidelines of these meetings where the role of the Moroccan delegation was central, he said, adding that the efforts of the Moroccan delegation have led to consensus and appropriate formulas on the majority of draft resolutions in their political, economic and social aspects. The ambassador noted in this regard that the Kingdom’s efforts, alongside other countries have led to the condemnation of Iranian interference and its impact on security and stability in the Arab region, noting that the Moroccan delegation has also had a decisive role in preparing platforms for the treatment of other issues of paramount importance for security, stability and sustainable development in several Arab countries and at the top of them the Palestinian issue. Tazi stressed, in this sense, that emphasis was placed on the tangible efforts of HM King Mohammed VI in favor of the Palestinian cause, the defense of Al-Quds and the support of the UN process to reach consensus between the Libyan parties for a political settlement based on the Skhirat Agreement, as well as the Moroccan aid for the reconstruction of Yemen and support for the development process in the Comoros Islands.