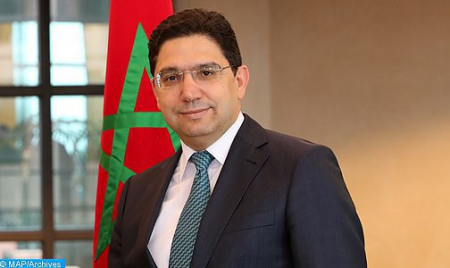 Cooperation with the Belgian region of Wallonia is part of the development of relations between Morocco and Belgium, said Thursday in Rabat, Minister of Foreign Affairs, African Cooperation and Moroccan Expatriates, Nasser Bourita. The last joint statement signed on October 20, 2022, on the occasion of the visit to Morocco of the Belgian Minister of Foreign Affairs, Hadja Lahbib, opened a new stage in bilateral relations, said MBourita in a statement to the press after his talks with Minister-President of the region of Wallonia, Elio Di Rupo, noting that cooperation with this Belgian region “is part of this development, including with regard to the Sahara issue”. In this joint statement, Belgium considers the autonomy plan, presented in 2007 by Morocco, as “a good basis for a solution accepted by the parties” regarding the Sahara issue. This position was also expressed on Thursday by Di Rupo who also noted in a statement to the press that the Moroccan autonomy plan is “a serious and credible effort” of the Kingdom. Bourita also recalled the long history of friendship and cooperation between Morocco and Wallonia dating back to 1999, describing as “positive” cooperation between the two parties. The Minister also noted that this cooperation is manifested through an important human component, with a large Moroccan community residing in this Belgian region. He said that his talks with Di Rupo were an opportunity to discuss the prospects for strengthening this cooperation, based on the developments that have occurred in ties between the two kingdoms.