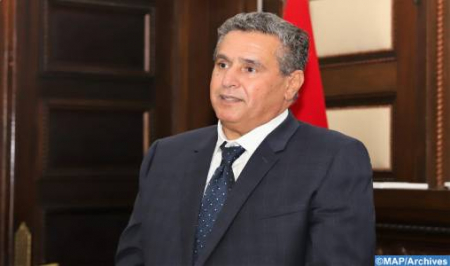 Head of Government, Aziz Akhannouch held on Wednesday in Rabat, talks with Minister-President of the Belgian region of Wallonia, Elio Di Rupo focused on ways to strengthen economic and trade cooperation to serve the interests of both countries. During this meeting, Akhannouch reviewed a number of sectors that offer important opportunities for strengthening economic and trade cooperation. In this regard, both parties highlighted the strength of historical relations between the two kingdoms under the leadership of HM King Mohammed VI and HM Philippe, King of Belgium. The two officials also welcomed the quality of human, cultural and economic relations between the two kingdoms, stressing that the Walloon region hosts an important Moroccan community estimated at 600,000 Moroccans who contribute effectively in the Belgian cultural, political and economic dynamics. In addition, Akhannouch and Rupo emphasized the promising prospects of the High Joint Moroccan-Belgian Commission which will hold its next meeting in 2023 in Rabat.