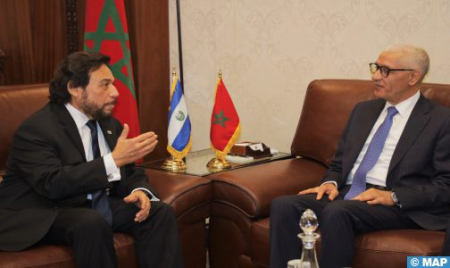 The exchange of experiences, efficient communication and permanent parliamentary dialogue were the focus of talks, on Monday in Rabat, between the Speaker of the House of Representatives, Rachid Talbi El Alami, and the Vice President of the Republic of El Salvador, Felix Ulloa, currently visiting the Kingdom at the invitation of the Head of Government (November 13-16). The talks focused on the excellence of bilateral relations and the positive positions of the Republic of El Salvador on the Sahara issue and the Kingdom’s territorial integrity, the Lower House said in a statement. During this meeting, the two parties discussed ways to strengthen parliamentary cooperation between the two countries through the institutionalization of bilateral and multilateral relations through the exchange of visits, the parliamentary friendship group, permanent communication, and capitalization on the assessment of bilateral and multilateral parliamentary relations, including the actions of the FOPREL forum, in addition to the examination of a series of priority issues of common interest. On this occasion, Talbi Alami welcomed the quality of ties between the House of Representatives and El Salvador’s Legislative Assembly, which he had visited in 2016, recalling his recent meeting with the Speaker of this assembly on the occasion of the 26th session of the FORPEL Forum in Rabat. He emphasized, in this regard, the importance of this kind of meetings, efficient parliamentary communication, exchange of views and sharing of experiences and expertise especially in relation to issues of common interest. The Speaker of the House of Representatives recalled, in this sense, the responsibility of parliamentarians on the national, regional and international levels in promoting dialogue, understanding and coordination to address common challenges. He added that such visits and meetings are likely to strengthen dialogue and effective communication, and are an opportunity to highlight the progress made by the Kingdom, including constitutional, human rights, security, energy, environmental, health and social fields, in addition to the institutional development accomplished over the past decade and the achievements of the House of Representatives, which have enabled it to occupy distinguished positions in many continental, regional and international parliamentary bodies and organizations. For his part, Ulloa commended the strong relations between the two countries and the role played by the Kingdom at the regional and international levels, recalling the position of his country on the issue of the Moroccan Sahara. While welcoming the constructive exchanges that marked his meeting with the Speaker of the House of Representatives, the Vice President of El Salvador stressed the importance of parliamentary relations in consolidating the rapprochement between the countries, clarifying positions and strengthening the bridges of permanent dialogue, stressing that his country aspires to the exchange of experiences and expertise, especially with regard to legislation in the fields of economy and investment.