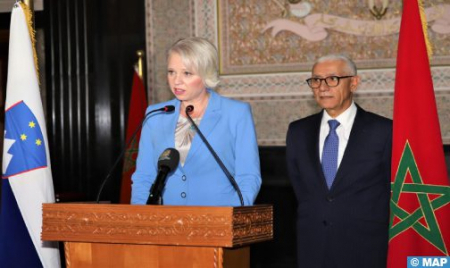 The House of Representatives and Slovenia’s National Assembly affirmed the importance of reaching a political, realistic and Consensual solution to the Sahara issue, in accordance with the resolutions of the United Nations Security Council relating to this question. This affirmation was expressed in a joint statement issued after the talks held on Monday in Rabat between the Speaker of the House of Representatives, Rachid Talbi Alami, and the Speaker of the National Assembly of the Republic of Slovenia, Urska Klakocar Zupancic. The statement said that both parties welcomed, during this meeting, the quality of relations between the Kingdom of Morocco and the Republic of Slovenia. The two parties noted the important role of the two legislative institutions in the development of relations between the two countries which celebrate this year the 30th anniversary of the establishment of their diplomatic relations. The same source said that both parties have highlighted the importance of the signing of a memorandum of understanding between Morocco’s House of Representatives and the National Assembly of the Republic of Slovenia and which would constitute an essential milestone to consolidate bilateral parliamentary relations in the various fields and strengthen dialogue and exchange of views on issues of common interest on the regional and international levels. They also emphasized the importance of strengthening partnerships aimed at promoting mutual understanding, stability and economic development, given the place of Morocco as a fundamental partner of the European Union (EU) and an important player in the African continent and the Mediterranean region.