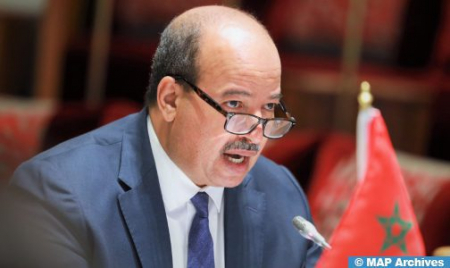 The Speaker of the House of Councillors, Enaam Mayara, held talks on Monday in Rabat with the Vice President of the Republic of El Salvador, Felix Ulloa, currently on a working visit to Morocco. At the beginning of this meeting, both parties expressed their satisfaction with the quality of political relations between Morocco and El Salvador, which have been consolidated after the inauguration of El Salvador’s Embassy in Rabat last October, as part of the evolution marking the relations of friendship and bilateral cooperation, and thanks the solicitude of His Majesty King Mohammed VI and the President of the Republic of El Salvador, Nayib Armando Bukele Ortez, the Upper House said on Tuesday in a statement. The talks focused on the importance of working to strengthen the bilateral economic partnership and the development of trade in various areas, in order to raise them to the level of solid political ties between the two countries, the statement added. Mayara and Ulloa noted that Morocco and El Salvador enjoy a remarkable geopolitical positioning and have great potential for cooperation especially in the areas of agriculture, renewable energy, infrastructure, housing and tourism, in addition to the opportunities offered by the four-year cooperation roadmap signed by the two countries in June 2019. Mayara stressed, in this regard, that the parliamentary dimension should occupy a special place in the remarkable momentum of bilateral relations, saying that the House of Councillors, by its constitutional weight and its specificities in terms of structure, prerogatives and economic and social powers, is fully prepared to back the process of development of these relations and support all initiatives to strengthen their foundations. The willingness to develop relations between Morocco and El Salvador stems from the particular attention that the House of Councillors pays to the issue of South-South cooperation as a strategic choice of the Kingdom of Morocco under the enlightened leadership of HM the King, explained Mayara, noting that the Upper House has acquired extensive experience in hosting and piloting multi-stakeholder dialogue meetings with Latin American states. Regarding the Sahara issue, the Speaker of the House of Councillors expressed his gratitude “for the noble position of the Republic of El Salvador towards the national cause”, especially after the withdrawal of its recognition of the puppet entity in June 2019, welcoming the renewed support of El Salvador to the Kingdom’s territorial integrity and the Moroccan Autonomy Initiative as a unique, realistic, peaceful and credible solution to the artificial conflict around the Moroccan Sahara. During this meeting, the Salvadoran official conveyed to Mayara an invitation from the Speaker of the Legislative Assembly of El Salvador, to make a working visit to this friendly country.