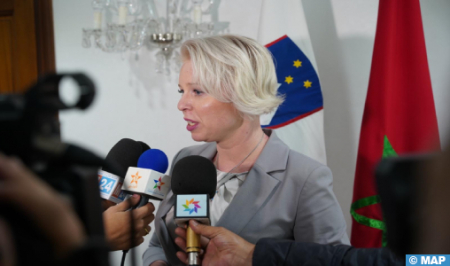 Slovenia expressed, on Friday, its wish to continue successful cooperation with Morocco, a country with which it has close ties of friendship. “Over the years, Slovenia and Morocco have established close and friendly ties. We aspire to continue successful cooperation,” the Slovenian Foreign Ministry stressed in a Tweet, on the occasion of the 67th anniversary of the Kingdom’s Independence Day. “Congratulations on the occasion of Morocco’s Independence Day and best wishes for prosperity and success,” adds the Tweet, which comes a few days after the visit to the Kingdom of the President of the National Assembly of the Republic of Slovenia, Urska Klakocar Zupancic. On the occasion of this visit, which took place on November 14-16, Klakocar Zupancic held talks with the Speaker of the House of Representatives, Rachid Talbi Alami, focusing on the quality of relations between the Kingdom of Morocco and the Republic of Slovenia. The two parties noted the important role of the two legislative institutions in the development of relations between the two countries which celebrate this year the 30th anniversary of the establishment of their diplomatic relations. They also discussed the strengthening of partnerships aimed at promoting mutual understanding, stability and economic development, given Morocco’s place as a fundamental partner of the European Union (EU) and important player in the African continent and the Mediterranean.