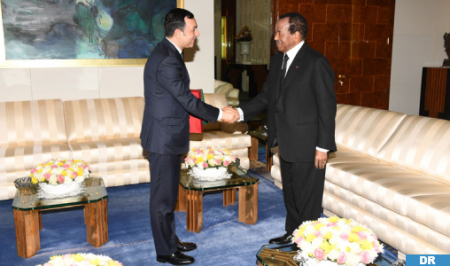 The Minister of Economic Inclusion, Small Business, Employment and Skills, Younes Sekkouri, welcomed the close cooperation between the Kingdom of Morocco and the Republic of Cameroon, highlighting the ties of brotherhood and friendship between His Majesty King Mohammed VI and President Paul Biya. Speaking to the press at the end of the audience granted to him by President Paul Biya at the Unity Palace in Yaoundé, the Moroccan minister, bearing a message from His Majesty the King to the Cameroonian Head of State, said that the talks were an opportunity to highlight “the excellence of relations between our two leaders, but also between our two countries and our two peoples,” the Cameroonian Presidency said on its official website. “I must say that the excellence of the partnership between our two countries can only be compared with the brotherhood between our two leaders,” added Sekkouri, quoted by the Presidency of Cameroon. The Moroccan minister, said the same source, also praised Cameroon, “a country that inspires and stands out on the African and global scene on many issues.” President Paul Biya and Minister Sekkouri also discussed the participation of the Indomitable Lions and the Atlas Lions in the 2022 World Cup, expressing the hope that these two great football nations honor the Continent at this major global event, the same source added. The Moroccan minister had been received in audience on Thursday in Libreville by the Gabonese President, Ali Bongo Ondimba, and on Friday in Kinshasa by the President of the Democratic Republic of Congo, Félix-Antoine Tshisekedi Tshilombo, to whom he delivered a message from His Majesty the King.