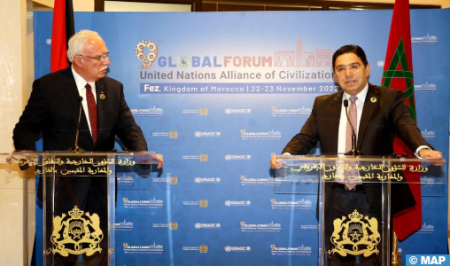 Minister of Foreign Affairs, African Cooperation and Moroccan Expatriates, Nasser Bourita met, Tuesday in Fez, with Palestinian Minister of Foreign Affairs, Riyad Al-Maliki, on the sidelines of the 9th Global Forum of the United Nations Alliance of Civilizations (UNAOC). In a statement to the press, Bourita said that these talks are part of the permanent contacts and continuous consultation between the two countries, in accordance with the directives of HM King Mohammed VI and the Palestinian president, Mahmoud Abbas. He stressed that bilateral visits will take place soon to discuss ways to strengthen cooperation between the Kingdom of Morocco and the State of Palestine in all areas of common interest, including economy and trade, as well as coordination and political consultation between the two countries on the development of the Palestinian issue, especially in the African continent. In this regard, Bourita expressed Morocco’s support, on high royal instructions, to the legitimate rights of the Palestinian people and its rejection of any infringement of these rights, stressing that HM the King, Chairman of the Al Quds Committee, pays particular attention to the preservation of the legal and historical status of the Holy City and rejects any infringement of this status. He added that the Sovereign has great consideration and respect for His Excellency Palestinian president Mahmoud Abbas, adding that His Majesty the King always expresses the constant position of the Kingdom of Morocco with regard to the Palestinian issue, in particular the right of the Palestinians to a sovereign and viable state on the borders of June 1967, with East Al Quds as its capital. For his part, Al-Maliki said that his talks with Bourita were an opportunity to discuss ways to preserve the momentum of the strong historical relationship between the Kingdom of Morocco and the State of Palestine and continue the dialogue on various issues of common interest. The Palestinian Foreign Minister stressed his country’s determination to make every effort to strengthen and develop bilateral relations with the Kingdom of Morocco and to continue discussions in the interest of the State of Palestine and the rights of the Palestinian people.