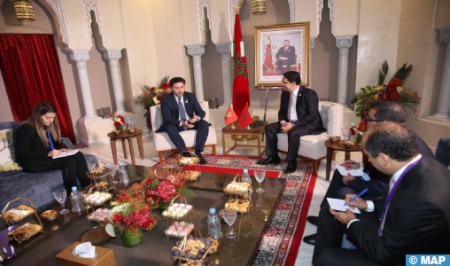 Prime Minister of Montenegro, Dritan Abazovic said, Tuesday in Fez, that Morocco and Montenegro have great potential to develop their cooperation and bring it to a higher level. During a press briefing after talks he had with Minister of Foreign Affairs, African Cooperation and Moroccan Expatriates, Nasser Bourita, on the sidelines of the 9th Forum of the UN Alliance of Civilizations (22-23 November), Abazovic expressed the willingness of his country to further consolidate its cooperation with the Kingdom, calling for the exchange of expertise and experience between the two countries in many areas. After stressing that Morocco and Montenegro are among the most important tourist destinations in the world, he stressed the need to strengthen cooperation between the two countries in various sectors, including tourism and renewable energy. The Prime Minister of Montenegro also noted that the city of Fez, with its historical symbolism, is the most appropriate place to send messages of solidarity and promote universal values in the difficult context that the world is going through at present, calling for the dissemination of the values of peace, tolerance and development in the world.