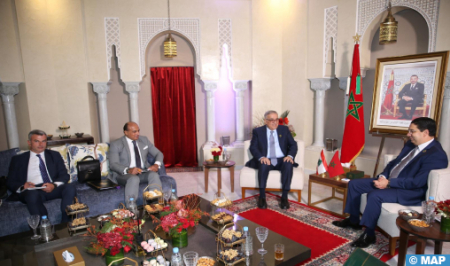 Minister of Foreign Affairs, African Cooperation and Moroccan Expatriates, Nasser Bourita, reiterated on Wednesday in Fez Morocco’s support to the stability and sovereignty of Lebanon. In a joint statement following his talks with Lebanese Foreign Minister Abdallah Bou Habib, on the sidelines of the 9th Global Forum of the UN Alliance of Civilizations, Bourita stressed the efforts of the Lebanese government to stay away from all political and military conflicts in the region. Bourita also congratulated the Lebanese minister for the success of the last parliamentary elections in his country, expressing the Kingdom’s aspiration to a consensus of all Lebanese components, as soon as possible, to complete the constitutional process by electing a president of the republic and thus move forward in the reforms undertaken by the government to establish an economic and social system beneficial to the brotherly Lebanese people. The Minister also noted that Morocco aspires to revitalize bilateral relations and to hold as soon as possible the 2nd session of the High Joint Committee and to modernize the legal framework in order to meet the accelerated global changes. He also stressed that Morocco welcomes the agreement delimiting the southern maritime border, with American mediation and under the auspices of the UN, and hopes that this agreement will help Lebanon benefit from its resources in order to promote its economy and achieve stability and prosperity.