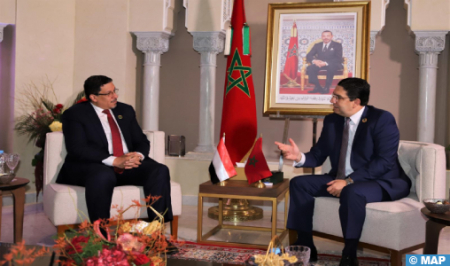 Yemeni Minister of Foreign Affairs and Expatriates, Ahmed Awad Bin Mubarak, reiterated on Wednesday in Fez his country’s constant position supporting Morocco’s territorial integrity. “Yemen reiterates its constant and solid position of principle towards issues of interest to Morocco, including the question of the Kingdom’s territorial integrity,” Bin Mubarak told the press after his talks with the Minister of Foreign Affairs, African Cooperation and Moroccans Expatriates, Nasser Bourita, on the sidelines of the 9th Global Forum of the UN Alliance of Civilizations. He stressed the need to move forward towards the development of bilateral relations and to materialize the points agreed upon during his visit to the Kingdom, including the granting of scholarships to Yemeni students, the facilitation of entry procedures for Yemenis in Morocco and other issues of consular character and those inherent in the dialogue and political consultation. The top Yemeni diplomat reaffirmed his country’s determination to coordinate with Morocco in all issues of Arab or international dimension, stating broad prospects for action and bilateral cooperation. He also congratulated the Kingdom for the success of the Global Forum of the Alliance of Civilizations, held in Fez, noting that the holding of this event in Morocco confirms the centrality of the Arab-Muslim civilization.