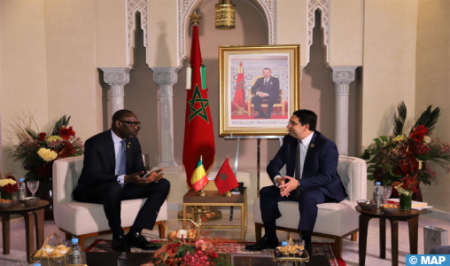 Malian Minister of Foreign Affairs and International Cooperation, Abdoulaye Diop, expressed on Wednesday in Fez his country’s gratitude and recognition for the “constant and pragmatic position” of HM King Mohammed VI and Morocco in relation to the transition in Mali. “I would like to address on behalf of the President of the transition in Mali, Colonel Goïta, all our gratitude and recognition to HM King Mohammed VI and Morocco for having always had, consistently, a rather pragmatic, open and realistic position with regard to the transition in Mali,” Diop told the press after his talks with the Minister of Foreign Affairs, African Cooperation and Moroccan Expatriates, Nasser Bourita, on the sidelines of the 9th Global Forum of the Alliance of Civilizations (UNAOC). “Morocco has always wanted to trust the genius of Malians to find answers to their problems,” said the top Malian diplomat, stressing that “this sent an important message to the international community to put itself in a position of support.” Diop also took the opportunity to express his satisfaction “with the level of exchanges and the quality of political interactions” between Rabat and Bamako, describing bilateral cooperation as “very rich and very positive in all sectors.” The Malian minister commended, in this regard, “very dense” trade relations between the two countries, noting that the Kingdom has helped “set up” the Malian banks, in addition to its specific contribution in the areas of telephony and agribusiness. “It is a cooperation that is very intense, and the levels of activity are quite high between the two countries,” he added, saying that his talks with Bourita were an opportunity to discuss ways to “make the free movement of people between the two countries as fluid as possible.” Diop also congratulated Morocco for the “success” of the work of the 9th Global Forum of the Alliance of Civilizations, praising the choice of Fez to host this event, a “mythical city that has greatly contributed to the rise of Muslim and human civilization.”