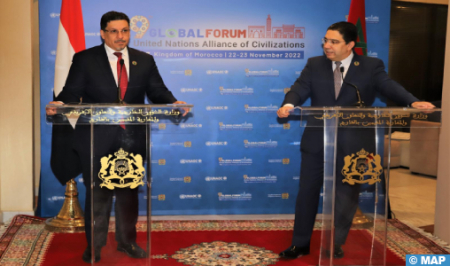 Minister of Foreign Affairs, African Cooperation and Moroccan Expatriates, Nasser Bourita, reiterated on Wednesday in Fez “the clear position” of Morocco supporting legality in Yemen and the role of the presidential council and the legitimate government. In a statement to the press after his talks with the Yemeni Minister of Foreign Affairs and Expatriates Ahmed Awad Bin Mubarak, on the sidelines of the 9th Global Forum of the UN Alliance of Civilizations, Bourita also stressed the Kingdom’s support to the territorial integrity and national sovereignty of Yemen, as well as the condemnation of all attempts by the terrorist group of “Houthis” and those who support it to undermine the stability of Yemen and the tranquility of its citizens. He said that the resolution of the Yemeni crisis must be based on dialogue and international and Arab references, objects of consensus, in respect of the legality in Yemen, represented by the Presidential Council and the government. Morocco will always stand by Yemen, in accordance with the High Instructions of HM King Mohammed VI, he stressed, highlighting the depth of bilateral relations and their deep-rooted human character, as well as their solid foundations, based on sincere brotherhood and active and continuous solidarity.