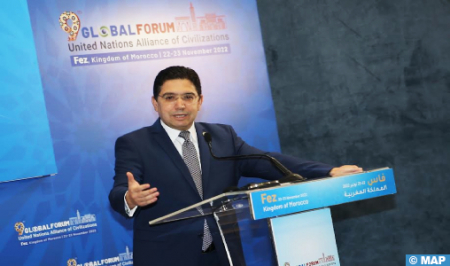 The Fez Forum is a turning point in the action of the UN Alliance of Civilizations, said Wednesday in Fez, Minister of Foreign Affairs, African Cooperation and Moroccan Expatriates, Nasser Bourita. Speaking at a joint press conference with High Representative for the Alliance of Civilizations, Miguel Angel Moratinos, before the end of this forum, held on November 22 and 23, Bourita stressed that this 9th edition is a turning point in the action of the Alliance in view of the context, the number of participants, the results achieved and the spirit of Fez, while relying on the guidelines contained in the Message sent by HM King Mohammed VI to participants. This international forum was a success at all levels with more than 1,500 participants, including official delegations representing states and governments, youth, associations and media, reflecting the interest in this edition at the regional and international levels, said Bourita. The Minister also highlighted the remarkable participation of the UN Secretary General, António Guterres, as well as some 40 participants at the ministerial level, nine presidents of regional and international organizations and twelve former heads of state and government, which constitutes a precedent in the Alliance’s meetings. The Fez forum was also a success in terms of debates, he added, noting that this meeting comes at a time when the world needs to enshrine the values of dialogue, understanding, tolerance, listening and to prevail reason and wisdom. The success of this forum is also reflected in its results which constituted an important development in the action of the Alliance of Civilizations, he said, explaining that the Fez Declaration adopted unanimously recalls the foundations behind the creation of this Alliance as well as it sets the objectives, priorities and action plan for the next period. The Minister also noted that the Royal Message was an important moment in this edition, as a reference document for the action of the Alliance, which identified the problems and defined the approach to be followed for their treatment, noting that the participants were unanimous in stressing that the Royal Message is a basic reference for the Alliance’s action. The Royal Message highlights the authentic history of the Kingdom and its spiritual capital Fez, he added, stressing that the Moroccan genius, which has long succeeded in enshrining coexistence, can be a source of inspiration for other countries. Referring to the African character of the Fez Forum, Bourita said that the Sovereign ensures that Africa is always present in the international agenda, noting that Guterres and Moratinos are convinced that Africa plays a major role in various areas. Africa is a positive actor in a range of issues, including those related to dialogue among cultures and civilizations, he underlined. The bet on the African character of the forum has been a success in view of the importance of the African presence and the remarkable contribution of the countries of the Continent, its youth and its civil society, said Bourita. The Minister stressed the importance of holding meetings of this African component of the Alliance in order to develop mechanisms and action plans related to Africa, noting that investment in dialogue and peace is less costly than investment in conflicts, wars and negative agendas. The role of Morocco, which always stands by the UN, on the High Instructions of HM the King, is not limited to the Fez Forum, he said, stressing that the Kingdom will support the future action of the Alliance of Civilizations.